Do you recognize this intersection?  How about the spelling in the paint?

by the way… this is the last turn that you would make when coming to VINTAGE church’s previous location. 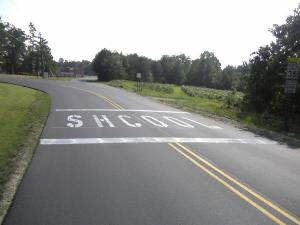 Here is the audio from a series I recently did on worship.

My prayer and desire is that people leave the gatherings knowing that mere human beings could not have created what they just experienced.

You’ve heard of the Mozart effect right? Studies have shown that classical music has a quantitative effect on us intellectually and emotionally. According to the Journal of the Royal Society of Medicine, Mozart music affects the electrical impulses in the brain. 23 out of 29 patients with severe epilepsy, in one study, showed reduced epileptic activity while listening to Mozart. And numerous studies have shown a similar effect.

Musicologist, Alfred Tomatis, says music is “sonic vitamin C.” According to Dr. Raymond Bahr, director of the coronary care unit at Saint Agnes Hospital in Baltimore: “Half an hour of music produced the same effects as ten milligrams of Valium.” And in case you care, there are even monasteries in Britain that play music to the animals in their care. They claim that cows serenaded with Mozart produce more milk.

Because music is so pervasive I think we take it for granted. Especially in the iPod age. But think about all the ways we use music. They range from putting babies to sleep to going to war. Almost every special occasion involves music. And that music sets the mood. We’re surrounded by music all the time. Whether we’re shopping or dining or stuck in an elevator, we’re being serenaded by music.

The power of music should not surprise us. And it certainly didn’t originate with Mozart. Long before the Mozart Effect there wasthe David Effect. I Samuel 16 says that when a harpist named David played his harp, it brought emotional relief to Saul. It also had a spiritual effect. The evil spirit that was tormenting Saul would leave. That is the power of music. For good or for evil, I think music is spiritual in nature. It’s not a human construct. It dates all the way back to time before time. The angels, including a fallen angel named Lucifer, worshiped God with singing before the creation of man. And according to Revelation 4, there is perpetual singing on the other side of the space-time continuum.

Here is an awesome thought: you are part of an eternal chorus that is being sung to the Creator of the Universe. And no one else can take your part. No one can sing like you or for you. Maybe that is why each of us have an absolutely unique voiceprint?

I came across this film today.  Lemonade is inspiring and is incredibly well made.  You will want to watch this.

Update your lists.  If  you need to be inspired, or awe-struck, go see Avatar.  I still cannot get the experience.